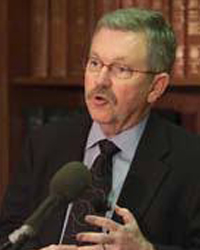 President Bush directed in June 2003 that the hunt for Iraqi weapons of mass destruction be transferred from the Defense Department to the Central Intelligence Agency and the Director of the Central Intelligence Agency appointed Dr. David Kay to lead that search and direct the activities of the 1,400 hundred member Iraq Survey Group. In January 2004, having concluded that there had been no stockpiles of weapons of mass destruction in Iraq at the time of the war, Dr. Kay reported that conclusion and resigned his position. This decision immediately led to Congressional hearings and the appointment of an independent commission to investigate the causes of US intelligence failings prior to the war, as well as how this intelligence was communicated and used by policymakers.

Currently, Dr. David Kay is a Senior Fellow at the Potomac Institute for Policy Studies and concentrates on counterterrorism and weapons proliferation. He also is a frequent commentator in the media on proliferation and terrorism issues.

He served as the IAEA/UNSCOM Chief Nuclear Weapons Inspector, leading numerous inspections into Iraq following the end of the Gulf War to determine Iraqi nuclear weapons production capability. He led teams that found and identified the scope and extent of Iraqi uranium enrichment activities, located the major Iraqi center for assembly of nuclear weapons, and seized large amounts of documents on the Iraqi nuclear weapons program, spending four days as a Saddam hostage in a Baghdad parking lot. He also led the analysis of the nature of the Iraqi nuclear program and its implications for non-proliferation and arms control activities.

Dr. Kay has frequently testified before Congress, and his articles have appeared in The New York Times, The Washington Post, The Christian Science Monitor, The Washington Quarterly and The New Republic, and a number of scholarly journals. He also has appeared on Nightline, McNeal-Lehrer, Today, Good Morning America, CNN and the evening news programs of PBS, ABC, CBS and NBC and has been a frequent BBC commentator on nuclear and defense matters.

He has served on a number of official U.S. government delegations and government and private advisory commissions, including the Defense Science Board, U.S. State Department's Advisory Commission on International Organizations, the Rockefeller Foundation's Advisory Group on Conflicts in International Relations, and the U.S. Delegation to the UN General Assembly.

Dr. Kay holds a Bachelors degree from the University of Texas at Austin and a Master's in International Affairs and Ph.D. degrees from Columbia University. He is the recipient of the IAEA's Distinguished Service Award and the U.S. Secretary of State's Commendation.