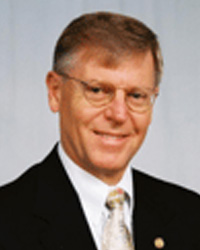 Dr. Dennis McBride joined the Institute as its Executive Vice President in April 2001, a position he held until assuming the presidency from 2001 to 2009, and now serves as President Emeritus and Fellow. Dr. McBride is an affiliated professor at the Georgetown University Public Policy Institute (teaching four courses and supervising graduate research), and the Georgetown University Medical Center (teaching four courses and supervising research). He was formerly Co-Editor of the peer reviewed journal, Technology; he was formerly the Editor in Chief of Review of Policy Research.

As President of the Institute, Dr. McBride led technical programs, including significant support to the Defense Advanced Research Projects Agency (DARPA), the Office of Naval Research (ONR), the National Science Foundation (NSF), and the National Academies of Science/National Research Council (NAS/NRC), as well as to pharmaceutical and ergonomics industries. Dr. McBride was previously the Executive Director, Institute for Simulation and Training, University of Central Florida, elected by the faculty to Professor, with dual appointments in the College of Engineering and Computer Science (home of tenure), and in the Department of Psychology, College of Arts and Sciences. Professor McBride was also a member of the Burnette Honors College teaching faculty.

Dr. McBride completed a 20-year Naval career at the grade of Captain (O-6), Medical Service Corps, as a Naval Aerospace Experimental Psychologist, and flight test engineer. Earning gold wings in 1980, his tours included bench-to-management science and technology at five Navy laboratories, three major headquarters organizations (including ONR and the Navy Medical Research and Development Command), and two joint assignments. Duties took him from human engineering of extremely skilled human performance in the problem domains of anti-submarine, electronic, air-to-air, and counter-mine, to information warfare. He served as program manager at DARPA from 1989 until 1994. There, he managed national-level modeling and simulation (M&S) programs in excess of $100 million, and he initiated the first approved Office of the Secretary of Defense Advanced Concepts Technology Demonstration (ACTD), known as Synthetic Theatre of War. Dr. McBride served as acting program manager for the X-31 variable thrust-vectoring experimental test aircraft program. He directed technical components of two additional policy-driving ACTDs. He established the Department of Defense’s (DoD) Joint effort in Advanced Distributed Learning (ADL), founding its Joint Co-Laboratory in 1999. He served as the head of the corps of Aerospace Experimental Psychologists as a collateral assignment from the office of the Surgeon General of the Navy.

Dr. McBride’s formal education includes enrollment at the University of Georgia, University of Southern California, and the London School of Economics. He holds a Ph.D., three Master’s of Science degrees, a Bachelor of Science degree, and an MPA. Trained as a flight test engineer at the University of Tennessee Space Institute under the sponsorship of the Navy’s Test Pilot School, Dr. McBride was selected by the Navy as a mission specialist astronaut candidate. He was a summer resident scholar at the Santa Fe Institute. Professor McBride holds professional credentials from the Board of Certification in Professional Ergonomics, and in Professional Modeling and Simulation from the National Training Systems Association.

Dr. McBride is or has been a member of several editorial boards, including the International Journal for Human Computer Interaction, Theoretical Issues in Ergonomics, Behavioral and Brain Science, and reviewer for several other journals. He was formerly a Director, Board of Certification in Professional Ergonomics; Member, Executive Oversight Council, M&S Professional Certification Commission; and member of the Steering Committee, Human Systems Information Analysis Center, among other board positions, such as Executive Advisory Panel, Institute for Creative Technology, University of Southern California. He is a member of the advisory boards for the Atlantic Legal Foundation and the Institute for Trade and Sustainable Standards Development. He has advised many universities on strategies for enhancing research portfolios, and he has provided extensive subject matter expertise in judicial matters for civil and criminal cases, to include the U.S. Supreme Court. His most recent academic product is the book, Quantifying Human Information Processing (Rowman-Littlefield).

Dr. McBride has received numerous awards and military decorations including Defense Superior Service Medal and the Legion of Merit. Among his civilian awards is the L.P. Coombes Medal, presented by the Australian Institution of Engineers. He has published, presented and edited more than 125 scientific articles, technical reports, and book chapters in the fields of psychobiology, experimental psychology, medical and pharmacological research, engineering science, operations research, complexity science, political science, and public policy. His works have formed the technical basis of litigation heard before the United States Supreme Court, and have been reported in a diversity of popular media, including Business Week, Omni, Health, New Scientist,Chronicle of Higher Education, ABC News, CBS Sixty Minutes, New York Times, Los Angeles Times, and the Washington Post.