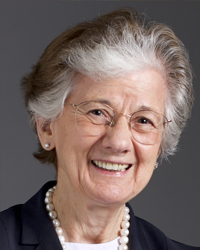 Dr. Rita Colwell’s interests are focused on global infectious diseases, water, and health and Dr. Colwell developed an international network to address emerging infectious diseases and water issues, including safe drinking water for both the developed and developing world, in collaboration with Safe Water Network, headquartered in New York City.

Dr. Colwell has been awarded 63 honorary degrees from institutions of higher education, including her Alma Mater, Purdue University and is the recipient of the 2005 Order of the Rising Sun, Gold and Silver Star, bestowed by the Emperor of Japan, the 2006 National Medal of Science awarded by the President of the United States, the 2010 Stockholm Water Prize awarded by the King of Sweden, the 2017 Vannevar Bush Award from the National Science Foundation, the 2017 International Prize for Biology from the Japan Society for the Promotion of Science, the 2017 Chevalier de la Légion d’Honneur (“Knight of the Legion of Honor”) bestowed by the Ambassador of France, and the 2018 Lee Kuan Yew Water Prize of Singapore. Dr. Colwell is an honorary member of the microbiological societies of the UK, Australia, France, India, Israel, Bangladesh, and the U.S. and has held several honorary professorships, including the University of Queensland, Australia. A geological site in Antarctica, Colwell Massif, has been named in recognition of her work in the Polar Regions.

Dr. Colwell has held many advisory positions in the U.S. Government, nonprofit science policy organizations, and private foundations, as well as in the international scientific research community. She is a nationally-respected scientist and educator, and has authored or co-authored 19 books and more than 800 scientific publications. She produced the award-winning film, Invisible Seas, and has served on editorial boards of numerous scientific journals. She serves as Chair of the Research Board for the Gulf of Mexico Research Initiative (2010-2020).

Born in Beverly, Massachusetts, Dr. Colwell holds a B.S. in Bacteriology and an M.S. in Genetics, from Purdue University, and a Ph.D. in Oceanography from the University of Washington.