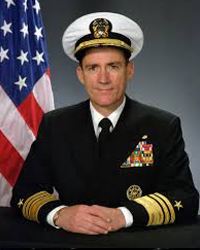 Following one year enlisted service and graduation from the U.S. Naval Academy, Natter rose to four-star Admiral. In 2003, Admiral Natter completed a distinguished 41-year Navy career as Commander of the U.S. Atlantic Fleet, the first Commander of U.S. Fleet Forces Command, the first Commander of all U.S. Navy and Coast Guard homeland defense forces under the newly created Northern Command, and the Commander-in-Chief of the NATO Western Atlantic Command. At that time the Atlantic Fleet consisted of over 160,000 Sailors and Marines, 162 ships and 1,200 aircraft, as well as 18 major shore stations. Admiral Natter’s military decorations include the Silver Star Medal, four awards of the Distinguished Service Medal, the Defense Superior Service Medal, the Bronze Star Medal with Combat V, Navy Commendation Medal with Combat V, Navy Achievement Medal with Combat V, and the Purple Heart, among others. His personal honors include the 1998 Order of the Rising Sun Medal by the Emperor of Japan; the 1998 Order of National Security Medal from the President of the Republic of Korea; the 2003 Ellis Island Medal of Honor, and the 2004 Distinguished Sea Service Leader of the Year by the Naval Order of the United States. Natter has earned Masters degrees in Business Management and International Relations, and is the fifth recipient of the Naval War College Distinguished Graduate Leadership Award.

In 2012 Natter assumed Chairmanship of the U.S. Naval Academy Alumni Association Board of Trustees, representing about 55,000 living graduates. He is also on the Board of the National Navy SEAL Museum.