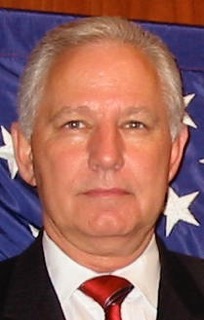 Bob’s law enforcement career began in 1971 while clerking at the Columbia, SC office of the Federal Bureau of Investigation (FBI), and he was later sworn in as a Special Agent. His offices were in Springfield, IL, New York, NY, FBI Academy - Critical Incident Response Group and the Pentagon and work involved interstate and violent crimes, crimes on a government reservation, foreign counterintelligence, and training with U.S. military special operations interests. As a certified FBI Instructor, SWAT operator and jump wings from the Navy and diving badge from the U.S. Army Special Forces Underwater Combat Diving School, his Bureau and military backgrounds served him well as Special Consultant to Commandant of the Marine Corps under legendary Marine General Al Gray. His advancement to GS-15 occurred as the key architect of a training paradigm to ensure the Marine Corps’ entry into special operations. The distinction of being the FBI’s first-ever Special Agent assigned directly to a U.S. Armed Forces Service Chief for sustained periods of time, 1987-1991 and 1998-2001, was a span that included five Commandants of the Marine Corps.

After retiring from the Bureau in 2001 and up until 2004, he fulfilled the role of National Coordinator for Law Enforcement, Public Safety and Civil Support at Headquarters, U.S. Marine Corps - Plans, Policies and Operations Department – PS. The billet had cognizance over the FBI-USMC TAMACOR Program and strengthened National Capital Region law enforcement and public safety relationships at all levels while assisting key planners to shape and implement Marine Corps policies for combatting terrorism, continuity of operations, critical infrastructure protection and support to civil authorities. Subsequent advisory roles were with the Civitas Group, Washington, D.C., EAI (acquired by Science & Applications Company - SAIC), Vectormax, Jersey City, NJ and liaison with the Director of Operations: HQMC – PP&O. In 2007, he became the Chief Security Officer at American Defense Systems, Inc., a world leader in the design, fabrication and installation of transparent and opaque armor systems. From 2011-2020, he worked for the FBI as a Special Investigator while conducting backgrounds and security clearance investigations of Bureau and other government agency personnel.