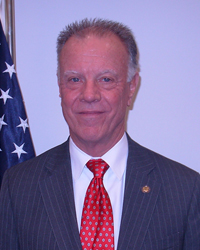 Previously, Mr. Shank was the first NSA/CSS Representative to USCYBERCOM.  As the senior advisor, he provided technical knowledge, insight and leadership to optimize NSA/CSS enterprise support to USCYBERCOM and their service components.  Prior to that assignment, he served as the Deputy NSA Chief of Staff for Cyber and was responsible for Cyber Strategy and Policy and for NSA/CSS support to planning for USCYBERCOM.

He is viewed as an imaginative theorist and operational planner for the employment of Cyber and Intelligence operations. As a direct outcome of his contributions, the NSA/CSS and the U.S. CYBERCOMMAND served as key sources of technical expertise and operational capability for projecting power and conducting defense in cyberspace.

Mr. Shank served as Deputy Commander, Menwith Hill Station from July 2007 to 2009, providing overall NSA senior management for the largest field site and contingent of NSA personnel outside of Headquarters.  He served as an Associate Director of the NSA/CSS Threat Operations Center from August 2006 to July 2007; during that period, he was responsible for the development of the Cyber Initiative.  From February 2005 through July 2006, as NSA/CSS Representative Defense, he served as DIRNSA’s senior representative in the Pentagon and provided Cryptologic leadership and technical insight in support of Department of Defense, the Joint Chiefs of Staff, and the Service Headquarters senior leadership.

Mr. Shank also served as Director, Information Operations Technology Center (IOTC) from April 2002 to February 2004.  The IOTC, established by the Secretary of Defense and the Director of Central Intelligence in March 1997, was a partnership through which the Defense and Intelligence communities worked together to improve the nation’s technical capabilities to conduct information operations.  Additionally, he established Network Attack Support Staff (NASS) as the permanent staff element of the U.S. Strategic Command’s Deputy Commander, Network Attack Planning and Integration, and he served as Chief of Staff to the Deputy Commander for Network Attack from August 2003 to February 2005.