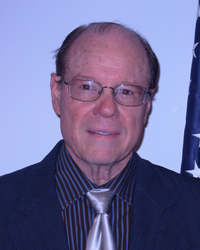 Dr. James Richardson is a Senior Fellow at the Potomac Institute, and an Associate with Burdeshaw Associates, Inc. He is also currently serving as Technology Advisor to Globesec Nine, an investment group. In March 2004, he presented a paper and wrote a chapter for the Science and Technology Policies Workshop on Anti-Terrorism Era, in Manchester, England (a NATO workshop sponsored by PREST). As a Potomac Institute Senior Fellow, Dr. Richardson participated on a Defense Intelligence Agency (DIA) Lessons Learned Panel, and helped to survey industry and governments for countermeasures against improvised explosive devices for the Rapid Equipping Force and the Joint Improvised Explosive Device Defeat Task Force.

From 1996 to 2003, he was Vice President for Research and Chief Scientist at Potomac Institute for Policy Studies, where he led major studies in several subject areas. Some of these studies involved: 1) transitioning the Defense Advanced Research Projects Agency’s (DARPA) technologies (funded by DARPA), 2) counter-terrorism and technology forecasting (for private industry and foundations), 3) impacts of science and technology on national security and how to improve decisions on science-laden issues (sponsored and funded by nine agencies and offices), 4) efficacy of military/commercial dual use technologies and products (funded by DARPA), 5) commercialization of the International Space Station (funded by NASA), 6) shipbuilding technologies developed under the MARITECH program, 7) impacts on global competitiveness of the U.S. shipbuilding industry and Navy ship construction (funded by DARPA), 8) a review of the Technology Reinvestment Project (sponsored and funded by DARPA), 9) an investigation of the Navy’s potential role in NMD (for the Assistant Secretary of the Navy), and 10) a forecast of impacts of science on military operations (multiple sponsors). He also advised several industries and organizations (e.g., the New York Police Department) on various technologies.

Dr. Richardson was an Adjunct Research Staff Member at the Institute for Defense Analyses (IDA) from August 1994 to January 1996.

From 1987 to 1994, he held several positions at DARPA (e.g., Director of the Land Systems Office, Special Assistant to the Director of DARPA, and Scientific Advisor for the US Ambassador to the Conventional Forces in Europe treaty negotiations in Vienna, Austria). He led the development of new combat technologies, wrote and negotiated an MOU with Department of Justice (signed by the Attorney General and Deputy Secretary of Defense), represented DoD in the “Partnership for a New Generation Vehicle” initiative, and directed the DARPA/Army/USMC Joint Armor Anti-Armor program chartered by the Secretary of Defense. His office performed R&D leading to the transition of 16 advanced products to the Army and Marine Corps featuring advanced materials, unconventional lethality and survivability technologies and hypervelocity projectiles, including the first large (9MJ) electromagnetic gun and a “smart minefield.”

From 1970 to 1987, Dr. Richardson held numerous positions at the US Army Missile Command at Redstone Arsenal, AL, from research engineer to the Command’s Deputy Director for Research, Development and Acquisition (SES). He also taught university courses in solid mechanics, kinematics and dynamics of machinery, vibrations and mathematics; as well as continuing education courses in engineering, and he delivered lectures internationally.

He served in the US Army, and was discharged with the rank of Captain.