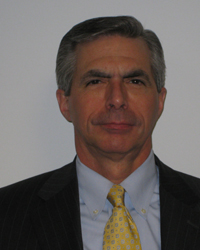 Jamie Barnett, RDML USNR (Ret.) is a Senior Fellow at the Potomac Institute for Policy Studies. RDML Barnett has over thirty years of experience in the U.S. Navy and a distinguished career in private law practice. From 2009-2012, he served in an IPA assignment as Chief of the Federal Communications Commission's Public Safety and Homeland Security Bureau (PSHSB). He previously served as a Senior Research Fellow of the Institute.

At the FCC, RDML Barnett was active in promoting cybersecurity initiatives and advancing emergency communications capabilities, including seminal work on the public safety broadband network. He created the Cybersecurity and Communications Reliability Division within PSHSB which achieved significant results in March, 2012 when the Division’s Communications Security, Reliability and Interoperability Council (CSRIC) announced three voluntary cybersecurity measures for Internet service providers (ISP), including a new ISP Code of Conduct to reduce botnets, implementation best practices for securing the Domain Name System, and creating a authoritative registry for Internet addresses to reduce Internet route hijacking.  Moreover, he worked to get ISPs to adopt the three measures that will cover almost 90% of all American Internet users.  RDML Barnett proposed the first nationwide test of the Emergency Alert System, which was conducted on November 9, 2011, and he laid the groundwork for a Next Generation 911 system.

A Rear Admiral (lower half) in the Navy Reserve, he served on active duty as Director of Navy Education and Training in the Pentagon during the crucial overhaul of the Navy’s Manpower, Personnel, Training and Education organization. He led a task force on developing a Navy Education Strategy and served on the Board of Advisors for the Naval Postgraduate School. His most recent active duty assignments include Acting Deputy Director of Expeditionary Warfare and Acting Deputy Director of Surface Warfare on the staff of the Chief of Naval Operations. His last active duty assignment was Deputy Commander of the Navy Expeditionary Combat Command in Little Creek, Virginia, which provides leadership of Explosive Ordnance Disposal, the Seabees, Naval Coastal Warfare, Mobile Diving and Salvage, Maritime Expeditionary Security Forces and Riverine Forces.

In 2001, then-Captain Barnett was recalled to active duty in Washington, D.C. to serve as a change manager and project lead in the Navy’s Revolution in Training (Task Force EXCEL), chartered to revolutionize the Navy’s training establishment, inject the science of learning, and create learning centers of excellence. He played a leadership role in designing the new training organization, including the Navy Personnel Development Command, the Center for Naval Leadership and the Human Performance Center. He was subsequently given command of the Center for Personal Development, charged with the responsibility for delivering college education to Navy members worldwide as well as training in ethics, diversity, finance, fitness, among others. He was awarded the first of four Legion of Merit medals for his work there.

RDML Barnett’s Navy career has focused on the Middle East and Africa ever since his first deployment there aboard USS JONAS INGRAM (DD-938) in 1977. He served as Executive Officer of the Military Sealift Command Office in Ad Dammam, Saudi Arabia during OPERATION DESERT SHIELD/DESERT STORM, and he later commanded Military Sealift Command units dedicated to the North and South Persian Gulf areas. His other commands include Mobile Inshore Undersea Warfare Unit 207, a Naval Coastal Warfare unit based in Jacksonville, Florida.

In civilian life, RDML Barnett advised and represented thousands of governmental officials and entities as an attorney, in the board room and in state and federal court during eighteen years of private practice. His clients included cities, counties, school districts, law enforcement agencies and development authorities, providing legal and policy advice on a range of topics, including constitutional law, governmental liability, personnel and employment law, education and school law, policy development, legislation, procurement, and ethics. He was a board attorney for several school districts, and has served as the President of the Council of School Board Attorneys in Mississippi. He received the statewide Exceptional Service Award for his work for the Pro Bono Project, and he was named the state’s Outstanding Young Lawyer of the Year in 1989. He has presented continuing legal education seminars in constitutional law, school law and ethics.

RDML Barnett received his Juris Doctor from the University of Mississippi School of Law in 1984, where he was named the Dean Parham Williams Outstanding Student and served as Chairman of the Moot Court Board. He also served as the National Director of the ABA’s National Appellate competition.