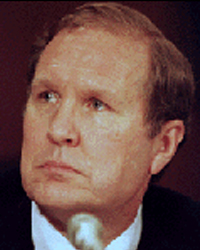 Gordon Oehler received both a B.S. in Electrical Engineering and a Ph.D. in physics from Rensselaer Polytechnic Institute. He is a 1981 graduate of the National War College.

After receiving his Ph.D., Dr. Oehler worked for a small firm in upper New York where he designed instrumentation for metallurgical applications. He subsequently joined the CIA in 1972 and served in a variety of analytical and managerial positions involving weapons systems and foreign policy analysis. Included in these assignments were the Chief of the Technology Transfer Assessment Center (responsible for impeding the flow of Western technology into Soviet weapons programs) and the Director of the Office of Scientific and Weapons Research (responsible for all analysis and reporting relating to foreign weapon systems and technology developments).

In May 1992, Dr. Oehler was appointed the Director of the Nonproliferation Center. In this capacity, he was the senior Intelligence Community spokesman on proliferation issues.

After leaving the CIA in October 1997, he served as corporate vice president for corporate development at Science Applications International Corporation. Subsequent to that, he was a deputy staff director for the president’s WMD commission that examined the intelligence failures leading up to the second Gulf war. The commission made seventy-three recommendations to improve intelligence capabilities—most of which have been adopted. He currently serves on a senior policy advisory board for the Department of State and is a working group chairman for the Congressional Commission on the Strategic Posture of the United States. He is also a Senior Fellow at the Potomac Institute for Policy Studies.