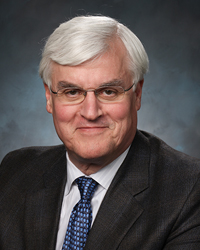 Dr. Parney Albright is President and CEO of HRL Laboratories, LLC. Dr. Albright joined HRL in 2014 after serving as Director and Associated Director at Large, Lawrence Livermore National Laboratory, and Senior Advisor, Office of the Director of National Intelligence (ODNI), Intelligence Advanced Research Projects Activity (IARPA), on assignment under an Interpersonel Agreement (IPA), where he supported IARPA as well as ODNI senior leadership on a variety of issues.

Before he joined LLNL, Dr. Albright served from August 2005 to November 2009 as President and Vice-Chairman of the Board of Civitas Group, LLC. He led the analytic team in support of the first Quadrennial Homeland Security Review, and in addition, led the development and publication of a comprehensive Biodefense Net Assessment under DHS sponsorship.

In October 2003 Dr. Albright was confirmed by the Senate as Assistant Secretary of Homeland Security in the Department of Homeland Security. He served in that position until July 2005. His responsibilities included developing the multi-year strategic planning guidance and budget execution for the complete portfolio of programs comprising the Science and Technology Directorate. Dr. Albright served as principal scientific advisor to the Secretary of Homeland Security on issues associated with science, technology, and the threat of biological, nuclear, and chemical terrorism. On these issues he served as the Department’s primary representative to other US Government agencies, the Homeland Security Council, the National Security Council, the Office of Science and Technology Policy, and foreign governments.

Between January 2002 and the startup of the Department of Homeland Security, Dr. Albright concurrently held the positions of Senior Director for Research and Development in the Office of Homeland Security and Assistant Director for Homeland and National Security within the Office of Science and Technology Policy. He was the lead official within the White House responsible for providing advice to the Executive Office of the President on science and technology issues surrounding homeland security, and on the threat of biological, nuclear, and chemical terrorism. In July 2002, he was asked to lead the planning for the Chemical, Biological, Radiological, and Nuclear Directorate of the proposed Department of Homeland Security; this later evolved into the Science and Technology Directorate.

Between 1999 and being asked to serve in the White House after the events of September 11, 2001, Dr. Albright worked in the Advanced Technology Office at the Defense Advanced Research Projects Agency (DARPA). While there he developed and managed programs associated with special operations, intelligence collection, molecular biology, communications, and maritime operations.

From 1986 until joining DARPA, Dr. Albright worked at the federally funded Institute for Defense Analyses (IDA). While there, he became an internationally recognized expert on ballistic and cruise missile defense systems; space based infrared and launch detection systems; and weapons and sensor system design and analysis.

He has authored several policy papers for internal or public consumption, primarily in the areas of homeland and national security. He has also been the author of numerous technical publications and briefings, in both the open and classified literature, primarily in the areas of statistical physics, infrared phenomenology; space-based tactical warning and attack assessment systems; intelligence collection systems; and ballistic and cruise missile defense systems.