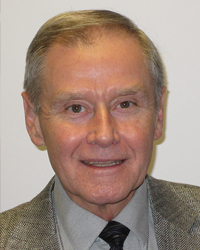 Mr. Montgomery has served since 2001 as a Senior Fellow at the Potomac Institute for Policy Studies.  He was, from 2003-2008, the Executive Director of the Institute for Defense and Homeland Security, with emphasis on energy independence, biodefense, telecommunications, remote presence, sensor systems, risk management and crisis management Research and Development (R&D).  He served also as a member of the Defense Science Board Task Force on Energy Strategy.  He has focused his recent efforts on two strategic goals: (1) national energy security/energy independence; and (2) reinvigoration of the national Science and Technology base and Research and Development infrastructure.  His book “Bureaucratic Nirvana – Life in the Center of the Box,” which discusses the inner workings of the federal R&D system, was published in October 2010.

Mr. Montgomery served for 16 years on the staff of the Chief of Naval Operations (N091B).  As the Department of Navy (DON) senior career civilian for Science and Technology requirements and resources, he was Resource Sponsor of a $3B R&D account, including the programs executed by the Office of Naval Research.  Responsibilities included requirements development, strategic planning, program guidance, policy, investment strategy and program assessment.  He was the creator of Advanced Technology Demonstrations (ATDs) for technology transition and an original architect of the current Future Naval Capabilities planning process.  He was instrumental in expanding the Naval ATD concept into Department of Defense Advanced Concept Technology Demonstrations (ACTDs).  He served as the DON principal career civilian official for S&T program interface and program justification to DOD and Congress.

Mr. Montgomery served for two years as the first civilian Technical Director of the Marine Corps Warfighting Laboratory, with broad oversight of USMC initiatives in technology development and transition, warfighting experiments, emerging threats and opportunities and wargaming.  He was the senior Marine Corps civilian official for oversight and assessment of the $100M USMC Science and Technology investment.

Mr. Montgomery served for four years on the senior staff of the Office of Naval Technology.  As Director of Planning and Programming, he developed the initial Planning, Programming and Budgeting System and the first strategic plan for Naval Applied Research.  He was the first DON Industry Independent Research and Development (IR&D) Manager, and created and managed the system for oversight and assessment of the multi-billion dollar industry IR&D investment.  Earlier senior assignments include: Director of Research, Naval Sea Systems Command; Deputy Director, Explosives Division, Naval Surface Warfare Center (NSWC); Head Technology Branch, NSWC.

Mr. Montgomery received a BS Degree in Physics and Mathematics from Mississippi College, graduating first in the Class of 1966 with a 4.0 GPA.  He received an MS Degree in Physics in 1969 at the University of Tennessee.  His Physics Ph.D. was completed but not formally awarded, after two dissertation topics each became classified.  He is also an International Security Policy graduate of the Kennedy School of Harvard University and an alumnus of the Federal Executive Institute.

Mr. Montgomery lectures frequently on national and international Science and Technology policy.  He has published and lectured extensively as an authority on Research and Development, energy, explosives and reactive and incendiary materials.

Active in his community, Mr. Montgomery is experienced in transportation, land use and regional development issues.  A certified planner, he served for 12 years on the Spotsylvania County Planning Commission, as well as on multiple regional committees. He is appointed currently to the Virginia Commission on Energy and Environment and the Transportation Accountability Commission.  An active member of Ferry Farm Baptist Church, he serves as a deacon, choir member, musician and teacher.  He conducts a Christian music ministry as a singer and musician.  He and Mitzie have been married since 1966 and have two daughters, Melinda Montgomery-Wiegers (Head, Warfighting Assessment Branch, Office of the Chief of Naval Operations) and Michelle Montgomery Pettit (Assistant U.S. Attorney and Naval Reserve Commander) and grandchildren Katie and Jackson Wiegers and Andrew and Lauren Pettit.