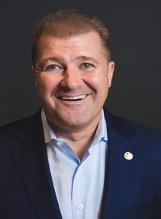 Mr. Hibbeln is our newest fellow at the Potomac Institute for Policy Studies. He is also a Venture Partner at Sinewave Ventures. Prior to this he served over 20 years as a senior civilian in the US Government. His final assignment was the Director of the Remote Sensing Center – National Capital Region where he managed over $8B in US Government contracts. The RSC-NCR supported the DoD and US Intelligence Community with technology demonstrations and operational support to combatant commanders around the world. Mr. Hibbeln also retired as an Air Force Reserve Officer with over 23 years of service. His final assignment was to the Mission Support Directorate of the National Reconnaissance Office (NRO).

Mr. Hibbeln previously served as the Assistant Deputy Undersecretary of Defense for Special Capabilities, in the Office of the Secretary of Defense (OSD). He managed over $2B in resources as the Director of the OSD - Special Capabilities Office (SCO). He was responsible for the oversight of Joint Capability Technology Demonstrations (JCTD’s) related to intelligence, space, airborne, and other remote sensing operations. He also oversaw the development of special technologies in support of the Combatant Commands, the Joint Staff, the Intelligence Community, and forward deployed operational users.

Mr. Hibbeln also served as the Chief Scientist and Chief Systems Engineer of the Measurement and Signatures Intelligence (MASINT) Staff at the NRO. He was responsible for the development of new overhead sources and methods to address hard intelligence problems and led the development of advanced space-based MASINT architectures. In this position, he provided recommendations to the Director of Central Intelligence, Congressional Staffs, senior policy and decision makers, and numerous operational and intelligence customers. Many of these programs transitioned to operational programs of record that continue to provide significant support to ongoing operations.

Before embarking on his government civilian career in 2000, Mr. Hibbeln served as an active duty Air Force Officer with assignments at both the National Air and Space Intelligence Center (NASIC) and the NRO. Upon release from active duty, he was awarded the Joint Meritorious Service Medal, a certificate of achievement from the Director of the CIA, and the NRO Silver Medal. In 2001, he was recalled to active duty to serve in OPERATION ENDURING FREEDOM. During this tour of duty, he led a number of new initiatives utilizing National, Civil, and Commercial space systems to combat terrorism and provide operational support to forces and the Intelligence Community. During this time, he also supported the White House Military Office as White House Social Aide to the President.

Mr. Hibbeln graduated from the United States Air Force Academy with a Bachelors of Physics in 1991. At the Academy, he was named the outstanding cadet in Physics Research for his work in spacecraft vehicle charging. He was also named the outstanding student in Survival, Escape, Resistance, and Evasion training. He earned a Masters of Physics in 1992 from the Air Force Institute of Technology. At AFIT he received an Air Force Invention Award and a U.S. patent for his work in pulsed power semiconductor switches.