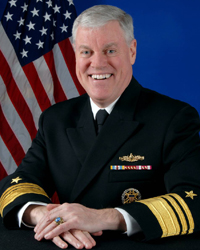 John Terence “Terry” Blake served more than 37 years in the United States Navy before retiring in February 2013. He most recently served as the Deputy Chief of Naval Operations for Integration of Capabilities and Resources (OPNAV N8). As the Navy’s Chief Financial Officer, he was charged with planning, programming and executing the Navy’s Budget. He also served in numerous positions in the Pentagon including Deputy Assistant Secretary of the Navy (Financial Management & Comptroller) and Deputy Director Resources and Acquisition (Joint Staff J8). His sea commands included a Destroyer, an AEGIS Cruiser, and a Carrier Strike Group.