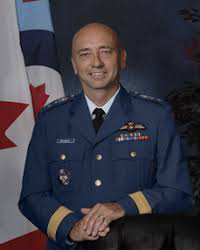 Lieutenant-General Yvan Blondin grew up in Aylmer, Quebec, and enrolled in the Canadian Forces in 1980. Upon completion of pilot training in 1982, he was assigned to VU32 Squadron in Shearwater, NS, to fly T33 aircraft. In 1986, following the Canadian acquisition of the CF18 fighter aircraft, he was selected for conversion and posted to the newly formed 433 Tactical Fighter Squadron in Bagotville. Lieutenant-General Blondin would eventually serve with the two fighter squadrons in Bagotville, accumulating more than 3,000 flying hours in North America and Europe on various Canadian Forces aircraft.

As a staff officer, Lieutenant-General Blondin has served in various personnel related positions in NDHQ from 1993 to 2000. From 2002 to 2004, he was part of the Canadian staff in NORAD Headquarters in Colorado Springs, Colorado. In 2006-2007, he deployed to Afghanistan, as Director of Staff in NATO ISAF Headquarters. Following his tour in Kabul, he was assigned as Deputy Commander Force Generation at 1 Canadian Air Division in Winnipeg.

Lieutenant-General Blondin retired from the RCAF in July 2015 and lives in Hudson, QC, Canada with his wife Jinny Lamoureux.