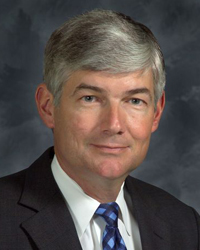 Eric Womble brings many years of experience in the defense industry and the executive and legislative branches of the U.S. federal government to his role as a Senior Fellow.

Mr. Womble was an executive at Northrop Grumman Shipbuilding and Huntington Ingalls Industries from 2004 through 2012. He was initially responsible for the Large Deck Amphibious program and then the Advanced Capabilities Group that did R&D, strategic planning, advanced concepts and new business development for the Shipbuilding sector, which had $6 billion in annual sales. While at HII and Northrop Grumman Corporation, he also served in leading Corporate Programs Division.

He has over 23 years of experience serving in the Executive and Legislative Branches of the United States federal government.  He became the National Security Advisor for Senator Trent Lott, Mississippi, in 1995.  He was instrumental in setting and passing legislation and appropriations that positively impacted the Department of Defense, its service members and their families.  He also coordinated all military, legislative and budget activities with the Pentagon, other Congressional offices, industry, academic institutions, the Senate Armed Services Committee and the Senate Defense and Military Construction Appropriations Subcommittees.

Eric Womble received his undergraduate degree in 1979 from the United States Naval Academy and was designated a Naval Flight Officer in 1980.  After his first squadron tour, he supported the Office of the CNO (OP?81).  Concurrently, he earned an MBA from Marymount College of Virginia and served as a White House Social Aide for President Ronald Reagan. Following his tour in Washington, D.C., he was assigned as Flag Secretary to Commander Seventh Fleet in Yokosuka, Japan, assigned as a Fleet Replacement Instructor in Patrol Squadron THIRTY (VP?30) and Operations Officer in Patrol Squadron FORTY?NINE (VP?49).

Mr. Womble served as principal  Executive Assistant to the Chief of Naval Research from 1992 to 1995.