The 15th MEU was deployed from 7 July 2017 to 2 February 2018, conducting operations in Pacific Command, Central Command and Africa Command. During the 211-day deployment the ARG/MEU functioned beyond mutually supporting range for 168 days. The ARG/MEU was split was 19 days, distributed for 44 days and disaggregated for 105 days1.

This was the maiden voyage for the amphibious assault ship USS America (LHA 6), which differs from previous LHA’s due to the fact that the America does not have a well deck. Instead, the America has more room for additional aviation capabilities. Capt. Ruiz described America as “designed to be a command-and-control ship”2.

The MEU totaled 2,500 Marines and over the course of the deployment 2,100 Marines went ashore. At one point the Marines were operating or supporting other Marine units in 21 different countries. While operating in Central Command the Marines participated in exercise Alligator Dagger with regional partners to rehearse potential contingency operations and crisis response. The Marines also participated in exercise Iron Magic, alongside coalition partners in the United Arab Emirates. The Aviation Combat Element of the 15th MEU directly supported the fight against violent extremism in support of Operation Inherent Resolve. 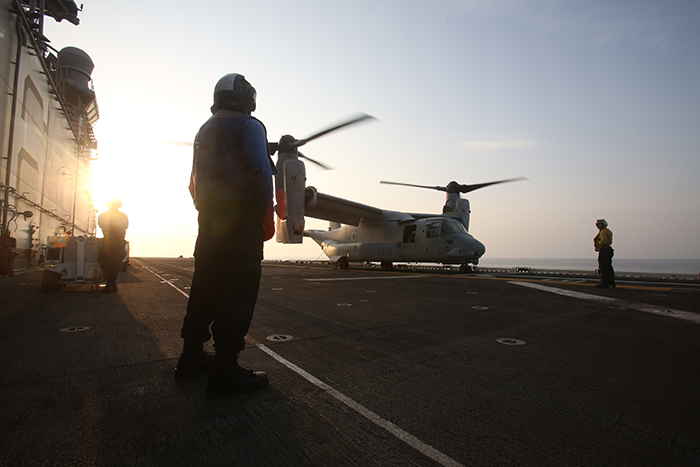 Sailors with the America Amphibious Ready Group prepare an MV-22B Osprey for take off aboard the amphibious assault ship USS America (LHA 6). The Osprey is designed for expeditionary assault support, raid operations, cargo lift and support to special warfare, it is capable of vertical takeoff and landing, and short and takeoff and landing (VSTOL). (U.S. Marine Corps photo by Lance Cpl. Dusty Kilcrease)