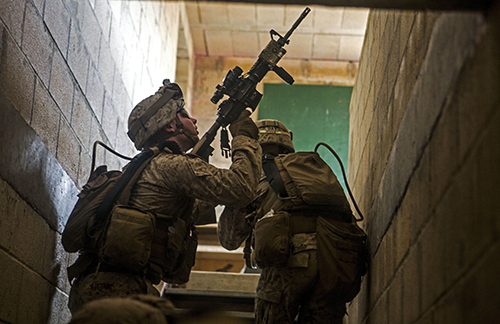 On Tuesday, April 10, 2018, the Center for Adaptation and Innovation (CAI) hosted the Special Purpose Marine Air-Ground Task Force—Crisis Response—Africa 18.1 (SPMAGTF-CR-AF) as part of its Returning Commander Speaker Series. The SPMAGTF-CR-AF was deployed from October 2017 through March 2018. Commanding Officer Colonel Michael J. Perez, USMC, alongside members of his staff briefed guests and Potomac Institute staff of the accomplishments and complex missions bestowed upon the SPMAGTF-CR-AF.

The SPMAGTF-CR-AF was comprised of roughly 1,000 Marines and Sailors, and has a unique mission to conduct limited crisis/contingency response operations to safeguard US citizens and interest in the USAFRICOM region as well as theatre security cooperation to enable training and progress the USAFFRICOM theatre campaign plan objectives.

While deployed the SPMAGTF-CR-AF trained in 10 European countries, operated within 9 different African nations while conducting 16 different theatre security cooperation events throughout the course of the deployment. Colonel Perez stressed the importance of intelligence gathering for the SPMAGTF-CR-AF, with such a unique and evolving mission set it was imperative to be tied into up-to-date intelligence for situational awareness. The Colonel also emphasized the value of relationship building with commanders from the host nations both in Europe as well as Africa, and the benefits of those good relationships moving forward, specifically in relation to joint training events for future SPMAGTF-CR-AF rotations.