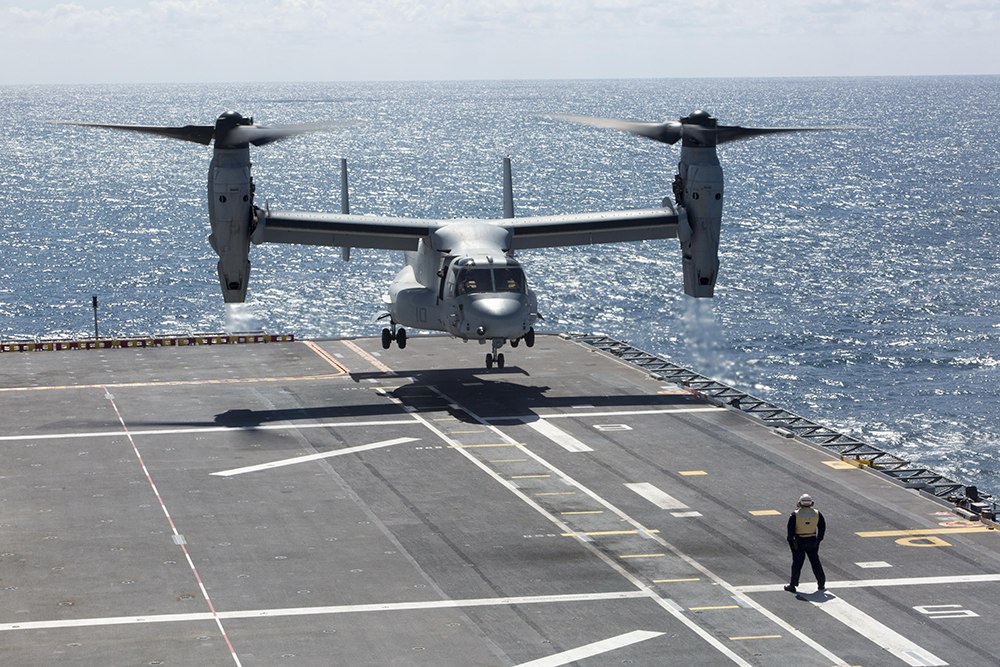 An MV-22 Osprey prepares to land on the deck of the Spanish amphibious assault ship, Juan Carlos I http://www.marines.mil/Photos/igphoto/2001641851/

During its seven-month deployment, the SPMAGTF-CR-AF maintained “a laser focus on readiness and alert posture,” as part of their mission to provide crisis response capabilities for the USAFRICOM Area of Responsibility. First, they conducted “new normal” operations including bolstering embassy security, facilitating humanitarian assistance, preparing non-combatant evacuation operations, and integrating with Joint, Interagency, Intergovernmental, and Multinational (JIIM) organizations. Second, they participated in thirteen Theater Security Cooperation (TSC) events in nine different countries, as well as 24 multilateral training exercises, and 54 unilateral training events. Support to Special Operations Forces was also provided throughout the entirety of their deployment, and the SPMAGTF-CR-AF conducted tactical recovery of aircraft personnel, and enabling operations.

During the second half of their deployment, the SPMAGTF-CR-AF became the first to have its squadron reduced to 6 MV22s and 3 CV130s, in order to help improve aviation readiness throughout the Marine Corps. Colonel Greenwood explained that this “institutional decision to buy back aviation readiness in the long-term increased capability but decreased capacity.” This change had the unexpected benefit of doubling pilot proficiency hours, while maintaining a similar level of ready aircraft. However, this approach also required a “single site, single focus,” meaning they could no longer be divided across Africa.

Another focus of this deployment was the Allied Maritime Basing Initiative (AMBI), which aimed to develop amphibious capability, and foster interoperability with coalition partners. The SPMAGTF-CR-AF trained with the Spanish and French Navies, particularly with the Spanish amphibious assault ship, Juan Carlos I, due to its optimal location in southern Spain.

Throughout their deployment, SPMAGTF-CR-AF prioritized increased cooperation with the U.S. Department of State. Colonel Greenwood visited eight high-risk/high-threat posts in Africa, and collaborated with State Department officials in order to develop emergency response plans. These types of protocols became particularly relevant following an electoral crisis in The Gambia. They deployed a small forward element to Dakar, Senegal, to monitor and prepare for any necessary response.

Colonel Greenwood concluded, that the key takeaways from this deployment were the surprising benefit of the reduction to 0.5 VMM, increased aviation readiness, and the importance of integrating readily available technologies.