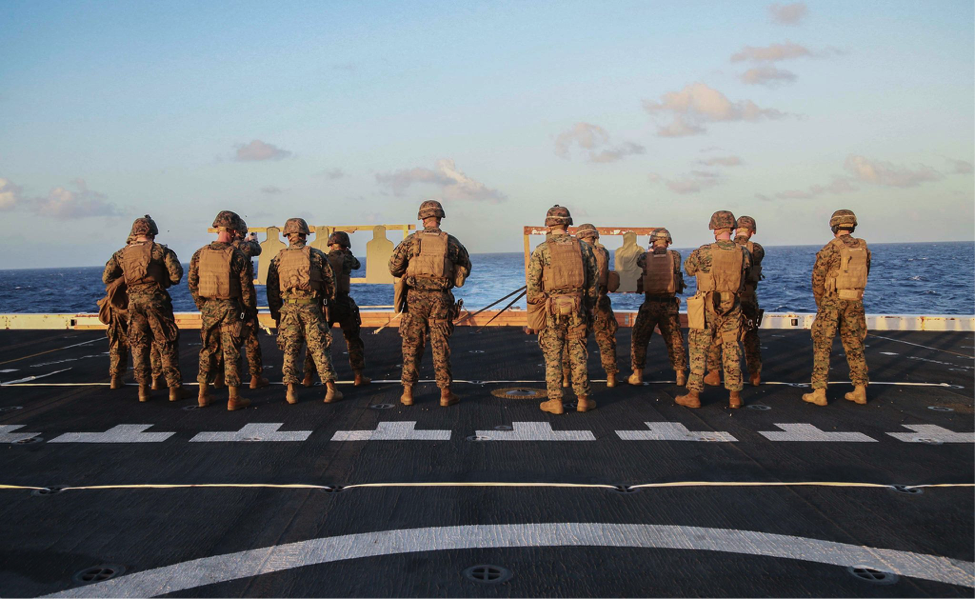 26 February 2016 - The Center for Adaptation and Innovation at the Potomac Institute for Policy Studies, as part of its Returning Commander Speaker Series, hosted a commander of the Essex ARG/15th MEU. This ARG/MEU completed a seven month (218 day) deployment on 15 December 2015. The deployment was divided into 38 aggregated days, 180 split days, and 18 disaggregated days.

The Marine Expeditionary Unit (MEU) is a flexible and capable standing Marine Air-Ground Task Force (MAGTF). The MEU is specifically designed to serve as globally responsive expeditionary quick reaction force, deployed aboard Amphibious Ready Group (ARG) shipping and prepared for immediate response to any crisis, to include natural disasters, theater security cooperation, and expeditionary combat missions. The ARG/MEU are becoming the operational “first choice,” and provide access and placement around the globe, including support to US embassies. Today, the ARG/MEU remains one of the most relevant forces to shape and respond to today’s security challenges.

During its deployment, which began 11 May 2015, the MEU conducted a range of naval expeditionary operations and activities in support of CENTCOM, AFRICOM, and PACOM requirements. The Pre-Deployment Training Program (PTP) focuses on integration of the US Navy (USN) and Marine Corps (USMC) into a truly naval force. Although operating as a split force for 180 days of the ARG/MEU deployment, success of their missions were attributed to training as an integrated naval force. The time spent training with special operations forces elements and informed loading of the ships – in order to increase flexibility and timeliness of response – also contributed to the deployment’s success.

While the Essex ARG/15th MEU deployment accomplished all assigned missions and tasks, some operational challenges still remain. Many of the challenges revolve around communication and overcoming the “last tactical mile.” The Navy and Marine Corps currently have a limited high frequency (HF) data capability. The USN and USMC need a digital wide band HF capability or other solution for the potential A2/AD environment. The unit is also looking for ways to close the intelligence gap from ship to shooter. The ARG/MEU needs all source intelligence capabilities at all levels as well as C5I systems that are responsive to operational demands. Other challenges, however, are of a more organization and education nature. There is a need for increased education among the naval forces and special operations forces about what an ARG/MEU can do in supporting-supported roles. Another challenge is staffing the COCOMs with enough experienced Liaison Officers with naval experience. Addressing these challenges will help better integrate the joint and allied naval force, which enable power projection and sea control across the full range of military operations.

The Center for Adaptation and Innovation (CAI) at the Potomac Institute was created to identify and define new and potentially disruptive defense capabilities. Specifically, CAI was established to assist senior defense leaders grappling with the most demanding issues and problems posed by a complex and uncertain security environment. CAI’s Returning Commander Speaker Series offers a forum for naval force concepts and capabilities to be discussed with commanders whom recently completed a deployment.