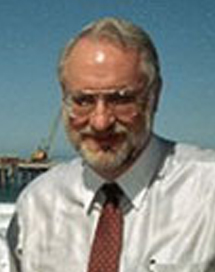 Dr. Saalfeld dedicated his life to Science and Technology and spent 40 years in civil service. He may be best known for his role as the Technical Director and Deputy Chief of Naval Research for ONR. His was a career filled with scientific firsts and achievements. He joined the National Research Laboratory in 1962. While there, he and his team lead pioneering research, developing the Central Air Monitoring System (CAMS) that makes recycled air breathable in submarines. That research into atmospheric monitoring and life support is used today in nuclear submarines, firefighting gear, spacecraft and other equipment using recirculated air. Potomac Institute CEO Michael Swetnam said, “Dr. Saalfeld was one of this country’s foremost supporters of science, technology, and policy based on science and technology. He was responsible for decades of US Navy research that became the foundation of our national defense. He is a hero in every sense of the word.”

The honors didn’t stop there. Several civilian employees have received the Dr. Fred E. Saalfeld Award, which recognizes lifetime achievements in science for those with the Department of the Navy, members of the military service on active duty, or contractors funded by the Department of the Navy.
Dr. Saalfeld and his wife Elizabeth were a frequent presence at PIPS. Those who knew him say he always gave sage advice and pushed PIPS staff to be bold and to think outside the box.

His contributions to PIPS are too many to list. PIPS CEO Michael Swetnam describes Dr. Saalfeld as a mentor and friend whose contributions to Potomac Institute are immeasurable. “Dr. Fred Saalfeld encouraged and supported the creation of the Potomac Institute for Policy Studies and he mentored us throughout our early years ensuring that we began and remained focused on national service, science, technology, and education. He was a visionary and leading voice in the development of science and technology that our freedoms so depend on today. The human race is measurably better because of him and diminished with his passing,” Swetnam said.

Upon his retirement from ONR, Dr. Saalfeld was honored and thanked on the floor of the U.S. Senate. The official record reads: “In times of adversity and challenge, America has always been blessed with men and women who have stepped forward to fight our battles and serve our country. Dr. Fred Saalfeld is such a man, much like those Founding Fathers who were patriot scientists and dedicated public servants. I wish we had more like him.”