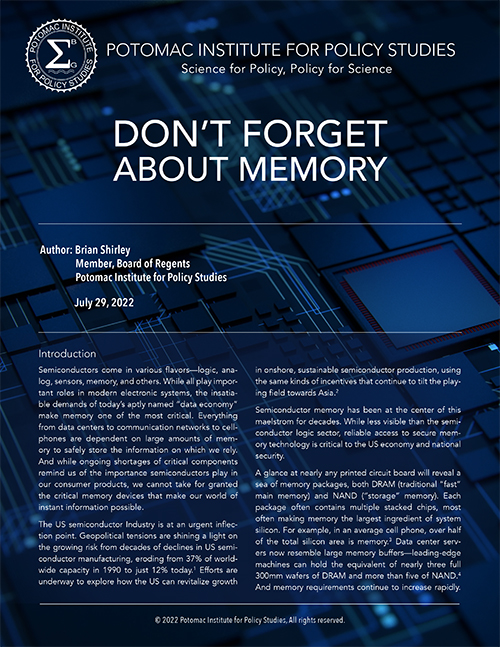 Semiconductors come in various flavors—logic, analog, sensors, memory, and others. While all play important roles in modern electronic systems, the insatiable demands of today’s aptly named “data economy” make memory one of the most critical. Everything from data centers to communication networks to cell- phones are dependent on large amounts of memory to safely store the information on which we rely. And while ongoing shortages of critical components remind us of the importance semiconductors play in our consumer products, we cannot take for granted the critical memory devices that make our world of instant information possible.

The US semiconductor Industry is at an urgent inflection point. Geopolitical tensions are shining a light on the growing risk from decades of declines in US semi- conductor manufacturing, eroding from 37% of world- wide capacity in 1990 to just 12% today. Efforts are underway to explore how the US can revitalize growth in onshore, sustainable semiconductor production, using the same kinds of incentives that continue to tilt the playing field towards Asia.

Semiconductor memory has been at the center of this maelstrom for decades. While less visible than the semi- conductor logic sector, reliable access to secure memory technology is critical to the US economy and national security.

A glance at nearly any printed circuit board will reveal a sea of memory packages, both DRAM (traditional “fast” main memory) and NAND (“storage” memory). Each package often contains multiple stacked chips, most often making memory the largest ingredient of system silicon. For example, in an average cell phone, over half of the total silicon area is memory. Data center servers now resemble large memory buffers—leading-edge machines can hold the equivalent of nearly three full 300mm wafers of DRAM and more than five of NAND. And memory requirements continue to increase rapidly.