5G Promises and Risks for US National Security 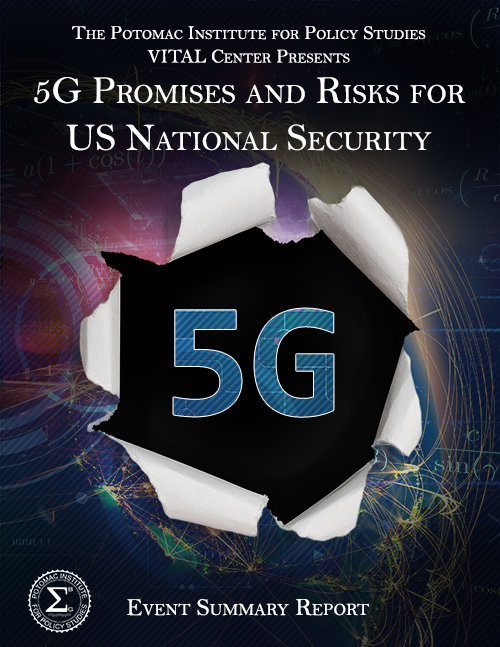 The continued development of 5G wireless technology will be a disruptive game changer for the communications industry and the worldwide economy. The quantum leap in performance afforded by 5G will spawn new industries and novel applications within existing industries like autonomous driving, healthcare, industrial automation, and remote sensing. Countries that dominate 5G technology development will enjoy major economic benefits resulting from these advancements. On July 22, 2019, the Potomac Institute for Policy Studies and Venable, LLP cohosted a seminar titled: “5G Promises and Risks for U.S. National Security” to explore issues around U.S. employment of 5G for national security. The event provided a platform for insightful conversation around the approaching reality of a 5G-connected world and the security risks that must be addressed.

The event was moderated by Dr. Michael Fritze, Director of the Potomac Institute’s Vital Infrastructure, Technology, and Logistics (VITAL) Center, which focuses on supply chain security and critical infrastructure resilience. The seminar began with an introduction from Ari Schwartz, Managing Director of Cybersecurity Services for Venable, LLP, followed by a keynote address from Robert Kolasky, Director of the National Risk Management Center (NRMC) of the Cybersecurity and Infra- structure Security Agency (CISA). The event discussion featured both Brain Hendricks, Vice President of Policy and Government Relations for Nokia Americas Region; and former federal government personnel to speak to critical infrastructure and risk management. The discussion compared the fundamental security differences between 5G and 4G technology.

Both government and industry must address such issues if the U.S. is to lead 5G technology. Supply chain security is an important area that requires more developed standards and policies, trusted suppliers, and technological understanding. It was pointed out that simply limiting a supplier to outside the network core misunderstands the technology, as 5G relies much more on processing at the network edge to deliver the faster speeds and lower latency. It has been reported that the average Internet of Things (IOT) network-deployed device is corrupted within two and a half minutes of the initial discovery of that device on a network. For national security, focusing on the “worst possible day” – rather than an “average day” – is needed to properly mitigate risks. The “5G Promises and Risks for U.S. National Security” implementation and security discussion revealed the need for more government investment in the 5G infrastructure to realize the timely rollout of a robust and protected 5G network.