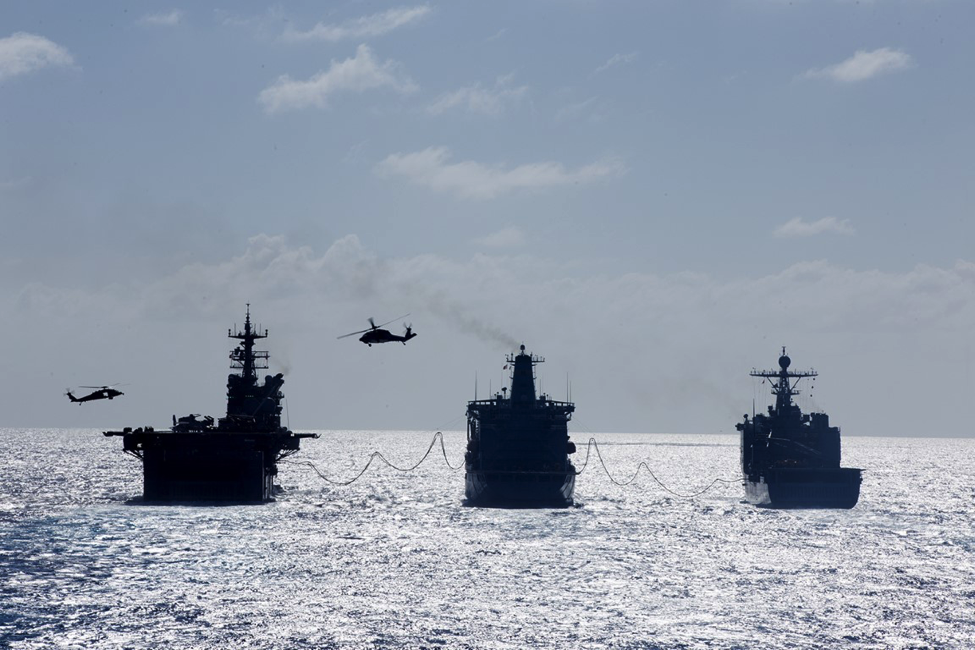 The Center for Adaptation and Innovation at the Potomac Institute for Policy Studies hosted a program presented by the USMC Returning Commander Speaker Series on Thursday, 16 April 2015 featuring the commanders of the Makin Island Amphibious Ready Group (ARG) and the 11th Marine Expeditionary Unit (MEU). During their seven month deployment, Captain Stephen McKone, USN, and Colonel Matthew Trollinger, USMC, led a Navy-Marine Corps team that completed missions that included conducting some of the first strikes in support of Operation Inherent Resolve, humanitarian assistance in the northwestern Hawaiian islands, and theater security cooperation exercises in Bangladesh, Malaysia, Kuwait and Saudi Arabia.

The deployment began with a large-scale sustainment training package in Hawaii. While the ships of the ARG steamed west from San Diego, Marines and Sailors pushed ashore, conducting an insert of forces from a distance of more than 800 nautical miles via MV-22 Osprey. Concurrently, Marines from the Reconnaissance detachment conducted bilateral training with Bangladeshi Special Forces. The ARG/MEU moved to Hong Kong next, and conducted a port call and liberty before transiting through the South China Sea and the Senkaku islands to engage with the Malaysian Marine Corps during a scheduled bilateral training event. In Malaysia, Marines trained alongside members of the Malaysian Armed Forces, culminating in a combined demonstration of projection of power from the sea for gathered regional leaders.

In Central Command, the MEU worked with British Royal Marines and Sailors, as well as the Kuwaiti Armed Forces in a multi-ship combined amphibious exercise, culminating in a combined amphibious assault with service members from all three nations. Additionally, while simultaneously supporting Operation Inherent Resolve and the ongoing crisis in Yemen, the MEU continued the tradition of training with the Kingdom of Saudi Arabia during a multi-day theatre security cooperation exercise. With ongoing uncertainty associated with the circumstances in Yemen, the 11th MEU was postured, and integrated with the broader Joint force, to respond to emergent tasking when called upon. Finally, the MEU conducted some of the first strikes in support of Operation Inherent Resolve, and maintained a constant presence to respond to emerging situations across the region.

In their presentation, CAPT McKone and Col Trollinger highlighted the significant role of the Special Operations Force Liaison Element (SOFLE) which not only brought tremendous capability by plugging the ARG/MEU into the Global Special Operations Forces (SOF) Network, but also acted as a key enabler for SOF/ARGMEU interoperability. By having the six man SOFLE team aboard providing the connective tissue into the Global SOF Network, the ARG/MEU leveraged complimentary capabilities which provided them with a “warm start”, having the complete SOF picture of the environment they were entering into vice a “cold start” where in the past they unsure of the environment and must be spun up.

Other takeaways include the established cooperative relationship between the 11th MEU and the Special Purpose Marine Air Ground Task Force Crisis Response Central Command (SPMAGTF-CR-CC); the tremendous capability the MEU brings to bear to achieve regional security objectives in a steady state environment, while not degrading theater reserve/crisis response capability; the sustained posture of be prepared to missions comes at a cost to material readiness and proficiency and sustained split/disaggregated employment impacted advertised MEU capability.

The Center for Adaptation and Innovation (CAI) identifies and defines new and potentially disruptive defense capabilities. Specifically, the Potomac Institute for Policy Studies established CAI to assist senior defense leaders grappling with the most demanding issues and problems posed by a complex and uncertain security environment.