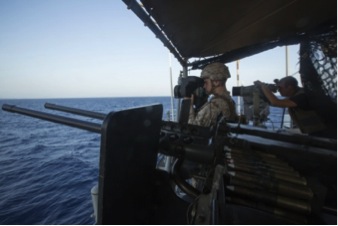 13 August 2015- The Center for Adaptation and Innovation at the Potomac Institute for Policy Studies as part of its U.S. Marine Corps Returning Commander Speaker Series hosted the commanders of the Iwo Jima Amphibious Ready Group (ARG) and the 24th Marine Expeditionary Unit (MEU).

During their seven month deployment across Europe, Africa and the Middle East, Captain Mike McMillan, USN, and Colonel Scott Benedict, USMC, led a Navy-Marine Corps team that embodied the tenets of scalability, flexibility and adaptability.

This ARG/MEU team accomplished a wide range of missions to include: assisting in the evacuation of U.S. citizens from Yemen, providing security detachments to U.S. Navy ships, executing theater security and partnership exercises, and executing sea control operations in the Strait of Bab Al Mandeb between Yemen and Djibouti.

The latter mission is unique due to a shift in employment paradigms called for in this complex maritime operational environment. Demonstrating the true uniqueness and flexibility of the Navy-Marine Corps Team, the ARG supported the traditional MEU missions and the MEU also supported traditional ARG missions. Additionally, during this deployment, the MEU also was employed in support of the ARG in the execution of traditional Navy missions - sea control and maritime security missions. The supporting role that Marines played in the execution of these sea control operations provides a start point to further explore how to construct future naval campaigns at the operational level that employ all elements of the naval forces in various supporting/supported roles in the various phases of a campaign.

Aggregated for only 6 days, the ARG/MEU team spent 97% of their deployment apart executing split operations, which allowed them to operate independently and execute a larger number and wider range of missions. This deployment model is clearly becoming the norm and is indicative of how the forward deployed Naval forces will operate in the future. This “new normal” will place a premium on understanding not only the difference between split versus disaggregated operations and the implications for the exercising of the tactical control of forces (TACON) but also the requirement for each amphibious warship in the ARG to have sufficient C2 systems and bandwidth, as well as organic ISR to successfully execute likely missions.

Operational concept and doctrine gaps are emerging from the execution of split operations and from the paradigm shifts occurring in relation to blue (ARG) in support green (MEU) and now green (MEU) in support of blue (ARG) operations. These gaps highlight the need for Naval leaders to take the necessary steps to develop the operational concepts that will connect strategic ends to tactical mission sets. This requirement comes at an opportune time for the Navy and Marine Corps to join together and reinvigorate the linkages and relationships that enable the conduct of naval maneuver warfare across the full range of military operations.

The Center for Adaptation and Innovation (CAI) identifies and defines new and potentially disruptive defense capabilities. Specifically, the Potomac Institute for Policy Studies established CAI to assist senior defense leaders grappling with the most demanding issues and problems posed by a complex and uncertain security environment.