The Ninth Annual Navigator Awards were held on July 23, 2008 at the Willard InterContinental Hotel in Washington, D.C.

Navigator Awards recognize extraordinary individuals from the Legislative Branch, the Executive Branch, and the Private Sector who have made significant contributions to further science and technology policy development in the United States. The Institute believes that honoring these leaders for their accomplishments promotes a continued understanding of science and technology and its growing impact on government and society. 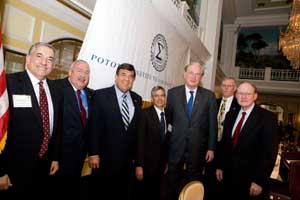 The Potomac Institute thanks our sponsors:

Senator Jay Rockefeller has proudly served the people of West Virginia for over 40 years. Rockefeller first came to West Virginia in 1964 as a 27-year-old VISTA volunteer serving in the small mining community of Emmons. Many of the lessons that Rockefeller learned in Emmons have shaped his public service career and led to his life-long commitment to improving the lives of West Virginians and all Americans.

As a long-time advocate of accessible and quality healthcare, Rockefeller is recognized as one of the strongest champions for health care reform. He has an extensive and distinguished career of fighting to reduce the number of uninsured children and working families, protecting and improving seniors' and veterans' health care, and fighting for the promised health benefits of retired coal miners and steelworkers.

To diversify and expand economic opportunities, Rockefeller has played an instrumental role in attracting new investment and jobs to West Virginia. In addition to bringing a Toyota manufacturing plant to Buffalo, Rockefeller has recruited numerous national and international companies to the Mountain State, resulting in thousands of new jobs. At the same time, Rockefeller maintains a strong focus on strengthening core industries such as steel, coal and chemicals by fighting for fair trade policies and targeted tax relief. He is also working on policies that will allow for energy independence by drawing on West Virginia's natural resources to produce clean and reliable fuels.

As part of Senator Rockefeller's effort to strengthen the lives of children and families, he has coauthored legislation to improve educational opportunities for students, promote stability through adoptions and foster care, increase minimum wage for employees, reduce violence and obscenity on television, and help every school and library connect to the Internet. He has also supported numerous targeted tax cuts for working families such as the child tax credit and the earned-income tax credit, and he supported eliminating the marriage penalty.

Rockefeller is also known for his strong national security credentials, support for our nation's soldiers and veterans, and oversight of the country's intelligence programs. He has been critical of the nation's mismanagement of the Iraq war, and continues to press the United States to refocus its mission and resources on al Qaida and global terrorism.

Mike McConnell was sworn in as the nation's second Director of National Intelligence on February 13, 2007.

Before his nomination as DNI, McConnell had served as a Senior Vice President with the consulting firm Booz Allen Hamilton, focusing on the Intelligence and National Security areas.

From 1992 to 1996, McConnell served as Director of the National Security Agency (NSA). He led NSA as it adapted to the multi-polar threats brought about by the end of the Cold War. Under his leadership, NSA routinely provided global Intelligence and Information Security Services to the White House, Cabinet officials and the Congress in addition to a broad array of military and civil intelligence customers. He also served as a member of the Director of Central Intelligence senior leadership team to address major intelligence programmatic and substantive issues from 1992 until 1996.

Prior to his service at NSA and during Desert Shield/Storm and the dissolution of the Soviet Union, McConnell worked as the Intelligence Officer (J2) for the Chairman of the Joint Chiefs of Staff and the Secretary of Defense.

In 1996, McConnell retired as a Vice Admiral in the U.S. Navy after 29 years of service - 26 as a career Intelligence Officer. He holds a M.P.A. from George Washington University, is a graduate of the National Defense University (Global Telecom), the National Defense Intelligence College (Strategic Intelligence), and holds a B.A. in Economics from Furman University. In addition to many of the nation's highest military awards for meritorious service, he holds the nation's highest award for service in the Intelligence Community. He also served as the Chairman and CEO of the Intelligence and National Security Alliance.
McConnell was born on July 26, 1943 in Greenville, South Carolina where he lived, grew up and first attended college. He is married to Terry McConnell and together they have four children and six grandchildren.

Dr. William Jeffrey rejoined the Institute for Defense Analyses (IDA) in September, 2007 as the Director of the Science and Technology Division.  Prior to his return, he served in the Bush Administration as the Director of the National Institute of Standards and Technology (NIST) within the Department of Commerce.  Dr. Jeffrey also served as Senior Director for Homeland and National Security and the Assistant Director for Space and Aeronautics at the Office of Science and Technology Policy (OSTP) within the Executive Office of the President.  Prior to OSTP, he was the Deputy Director for the Advanced Technology Office and Chief Scientist for the Tactical Technology Office at the Defense Advanced Research Projects Agency (DARPA). While at DARPA, he developed research programs in communications, computer network security, novel sensor development, and space operations. Previously Dr. Jeffrey was the Assistant Deputy for Technology at the Defense Airborne Reconnaissance Office, where he supervised sensor development for the Predator and Global Hawk Unmanned Aerial Vehicles and the development of common standards that allow for cross-service and cross-agency transfer of imagery and intelligence products. Dr. Jeffrey started his professional career at IDA.  He received his Ph.D. in astronomy from Harvard University and his B.Sc. in physics from the Massachusetts Institute of Technology.  He is an elected Fellow of the American Physical Society, an elected Honorary Member of ISA, and recipient of the Secretary of Defense Medal for Outstanding Public Service.

Professor Alexander has appeared on many television and radio programs in over 40 countries. His numerous articles and interviews have been published in both the United States and the international press.