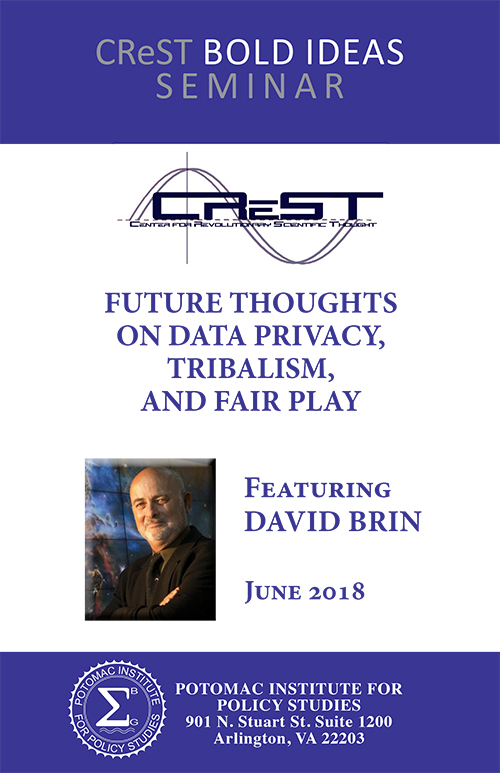 Washington, DC - David Brin, a world-renowned science fiction author and futurist, spoke at the Potomac Institute as part of the CReST Bold Ideas seminar series. Dr. Brin brings a novel perspective when looking towards the future, and spoke on several topics of current debate including data privacy, tribalism, regulation and fair play. His writings on these topics, both essays and fiction, have been pivotal in shaping public discussions on transparency and individual rights. His wide-ranging discussion is summarized below.

Dr. Brin discussed his concepts of transparency and sousveillance- “watching the watcher” - as the solution to current debates over digital privacy rights. He argued that the only way to destroy cheating and ensure individual rights is to break up power by democratizing technology. As the pace of technology development accelerates, he argues that we should not try to constrain technology because elites will always be able to find loopholes to get around these constraints. He criticized the European approach to data privacy as paternalistic in structure and therefore insufficient to fully protect individual rights. These concepts are described in his seminal nonfiction book, The Transparent Society, his recent book Chasing Shadows, and in his essays and speeches.

Brin discussed his concept of disputation arenas, in which there are five accountability arenas (markets, science, democracy, justice courts, and sports). Brin embraces conflict and competition within certain bounds, and notes that, “across all of human history the only time we’ve ever gotten the benefits of competition has been regulated competition.” To Brin, a fairly regulated arena is responsible for harnessing creative competition, and that competition is the greatest creative force in the universe.

Brin also touched on Hollywood themes, tribalism in politics, great power competition with China, and the need for every individual to be a critical thinker and contrarian.

David Brin is a scientist, tech-pundit, forecaster, NASA adviser, and best-selling author. He is best-known for shining light — plausibly and entertainingly — on technology, society, and countless challenges confronting our rambunctious civilization. His best-selling novels include The Postman (filmed in 1997) plus explorations of our near-future in Earth and Existence. His short stories explore vividly speculative ideas. Brin's nonfiction book The Transparent Society won the American Library Association's Freedom of Speech Award for exploring 21st Century concerns about security, secrecy, accountability and privacy. As a scientist, tech-consultant and world-known author, he speaks, advises, and writes widely on topics from national defense and homeland security to astronomy and space exploration, SETI and nanotechnology, future/prediction, creativity, and philanthropy. Urban Developer Magazine named him one of four World's Best Futurists, and he was cited as one of the top 10 writers the AI elite follow. David Brin’s website: http://davidbrin.com/